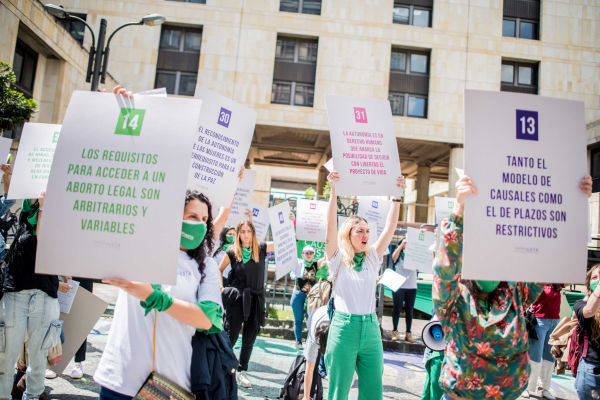 On February 21, 2022, the Constitutional Court of Colombia ruled to expand the rights of women and girls to obtain safe, legal abortions. The court’s decision decriminalizes abortions during the first 24 weeks of pregnancy and follows years of grass roots organizing by groups of women across Latin America. One of these groups was Channel grantee partner Women’s Link Worldwide (WLW), which was a key member of Causa Justa, the coalition of abortion rights groups that brought this case to court. Channel partner inroads shared a video from one of their members, ProFamilia Colombia, who have been working to bust stigma around abortion before this decision.

This ruling represents a culmination of over 15 years of work by WLW and local partners in the region. In 2006, WLW achieved its first victory in this fight by leading and filing a lawsuit requesting the Constitutional Court to declare the law that criminalized abortion unconstitutional. This resulted in the Court overturning Colombia’s total ban on abortion, allowing the procedure in three cases: rape or incest, fetal nonviability and threat to a woman’s life or health. Since then, WLW and their fellow rights defenders have faced countless obstacles, including hostile courts, misinformation, outdated cultural attitudes, social stigmas, and resistance from lawmakers. Despite these challenges, WLW and partners persevered, utilizing creative legal strategies to combat misinformation, protect access to abortion for sexual violence victims, and ultimately decriminalize abortion.

In the past two years, Channel partners have also helped to loosen restrictions on abortion in Mexico and Argentina, signifying a shift in attitudes on the procedure across the historically conservative region of Latin America. With the legalization of abortion in Argentina, activists established the green handkerchief as a symbol of the country’s abortion rights movement. Soon, a “green wave” spread across the region as the women’s rights movement in Latin America grew in strength and prominence.

After the Colombian court’s decision was announced, women outside the courthouse danced with green handkerchiefs in the air. This decision marks a major victory, both for Latin America’s “green wave” movement and the continued advancement of women’s rights in Colombia.

Your ticket for the: Colombia Decriminalizes Abortion