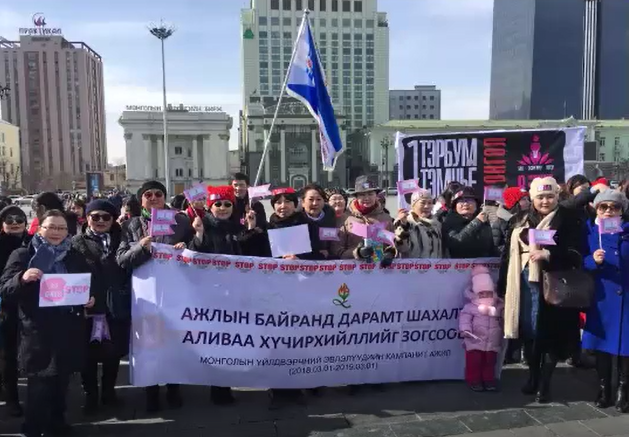 On June 24, 2021, Article 7, which prohibits sexual harassment in the workplace (SHW), was approved without any revisions by the Mongolian Parliament as part of a revised version of the country’s Labor Law, marking a major win for long time Channel grantee partner the Mongolian Women’s Fund (or MONES). The law, which came into effect on January 1, 2022, includes detailed provisions related to SHW, such as broader definitions for job, occupation, and labor relations and explicit formulation of types and forms of harassment and violence.

While this represents a major achievement for MONES, it was not an easy one to accomplish. MONES began this effort back in 2007, when they formed a coalition of 10 women’s NGOs to work on prevention of SHW. The Coalition led national campaigns to raise awareness, cooperated with female Parliament members, conducted research, and published assessment tools, which resulted in the incorporation of a SHW clause into Mongolia’s Gender Equality Law in 2011.

In 2013, the Coalition was included in a Working Group established by Mongolia’s Ministry of Labor and were able to conduct advocacy efforts from the inside. The initial intention of the Working Group was to submit a revised version of the Labor Law with SHW provisions to the 2013 Fall Session of the Parliament. However, the following seven years saw four changes of government and five different Ministers of Labor, meaning adoption of the revised law was repeatedly postponed and over ten versions of the SHW amendments were drafted.

Despite this setback, the Coalition continued working hard, providing trainings to more than 1,000 public and private institutions and launching a nationwide campaign similar to #MeToo. These efforts paid off, as Article 7, which prohibits SHW, was approved without any revisions on June 24, 2021. The Labor Law and its newly incorporated SHW provisions came into effect on January 1, 2022. According to MONES’ Executive Director Agni Baljinnyam, this legislation marks the greatest achievement of the last 14 years for MONES and the Coalition.

Channel is proud to have supported MONES to lead this work since its inception.

Your ticket for the: MONES Advocacy Leads to Change in Mongolian Labor Law