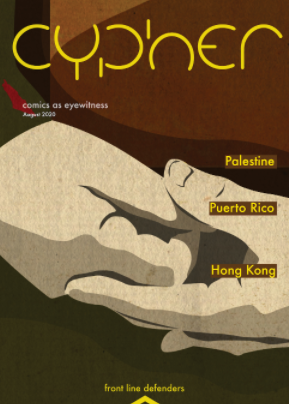 As part of its visibility efforts, FLD works to develop new means of presenting the work and lives of human rights defenders (HRDs) and deliver those stories to new audiences. Comics offer unique, creative, and different ways of engaging audiences and can be disseminated across digital platforms that can reach audiences that otherwise might not pay attention to more traditional forms of reporting. The Cypher ‘zine works with talented artists from around the world and will be a monthly publication featuring three or four stories of HRDs, their work, and the challenges they face. Front Line Defenders is enabling partnerships between the artists and the HRDs that can extend beyond the ‘zine and bring those stories to new communities to which the artists have access.

FLD comes to this project following a four-year process of developing, producing and disseminating the critically-acclaimed nonfiction graphic novel, La Lucha: The Story of Lucha Castro and Human Rights in Mexico. That book, published in English, Spanish and Italian, presented the work and lives of women human rights defenders in northern Mexico. Channel Foundation helped host Lucha Castro and featured the book with a launch event in Seattle, WA in 2015.

Following the publication in Spanish, FLD worked with educators and human rights defenders in Chihuahua state in Mexico to develop a curriculum to use the book in schools in the state. Since 2017, the book has been used by thousands of secondary school students and initial work is underway to develop the project to the national level. This book, and its reception, demonstrated to FLD – and to HRDs – how this form of powerful storytelling can be effective and impactful, including reaching audiences (i.e. students) that HRDs rarely have the ability to engage.