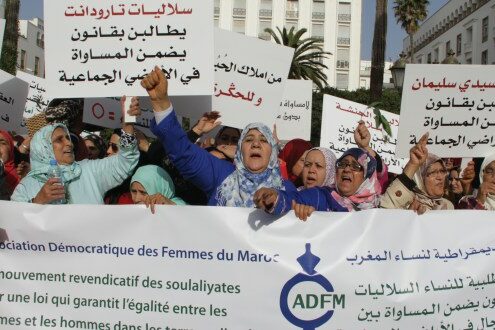 Approximately 50% of the world’s land is held in communal systems, but in over half of the world, women face legal and cultural obstacles to obtaining land rights. Since 2007, Channel partner the Women’s Learning Partnership (WLP) has been working on collective land issues with L’Association Démocratique des Femmes du Maroc (ADFM) and the Soulaliyates, rural tribal women in Morocco.

Over the years, this collaboration has resulted in advocacy campaigns, communications workshops, provincial and national land reforms, and more.

In March 2012, the Moroccan Ministry of Interior released a circular recognizing the right of women to compensation related to land sales and ADFM collected thousands of signatures from citizens to demand that the Ministry enact, in accordance with the Constitution, a specific law guaranteeing full equality between women and men belonging to the tribes of collective lands.

ADFM even created a short film portraying the multi-year mobilization by Soulaliyates women fighting for the rights to their collective land and the New York Times covered the story “In a Fight for Land, a Women’s Movement Shakes Morocco,” in May 2017.

In December 2020, the Soulaliyate network was challenged when a new Government Council decree (No. 2.19.973) made continuous residence on the land obligatory for an individual to acquire the status of being a member of the communal land beneficiaries/tribe. Due to historical reasons, many of which are a result of discrimination, Soulaliyate women are often unable to reside on the land. In response, WLP Morocco and the Soulaliyate women coordinated a national drive to collect 20,000 signatures in support of revising the decree.

Despite the obstacles still encountered by women on collective land, ADFM’s senior workshop facilitator, Khadija Oueldammou, believes the Soulaliyates’ situation has greatly improved – “Empowerment efforts have led to the awareness of Soulaliyates all over Morocco that they are entitled to collective lands on the same footing as men.”

Your ticket for the: WLP’s Partner in Morocco Fights for Women’s Equal Land Rights