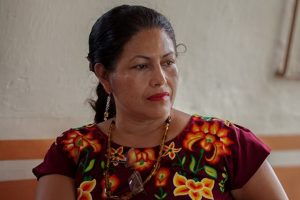 Bettina Cruz is a defender of Indigenous land rights in Tehuantepec, Mexico. As a Binnizá Indigenous woman and member of the Assembly of Istmo of Tehuantepec Indigenous Peoples in Defense of Land and Territory, Bettina works to counter the impact of private companies operating wind farms on Indigenous lands, without obtaining free, prior, and informed consent (FPIC). Bettina is also a member of the National Network of Women Human Rights Defenders in Mexico. In response to her activism, the Mexican Federal Government launched criminal charges against Bettina in 2012. Bettina demonstrated inspiring resilience throughout the course of her trial, which brought threats, assault, and arbitrary detainment against her. These charges were finally dismissed in February of 2015

On October 4th, Channel Foundation, grantee partner Global Fund for Women, and Pangea Global Giving co-hosted a conversation that discussed the central role that women’s organizations throughout Latin America play in the struggle for justice and basic human rights.

On October 5th, Channel partnered with the University of Washington’s Latin American and Caribbean Studies, American Ethnic Studies, American Indian Studies, and the Center for Human Rights departments to host an event where Cruz discussed her work in the struggle for Indigenous people’s rights.

Your ticket for the: Bettina Cruz Speaker Series: Climate Change and Land Rights in Mexico